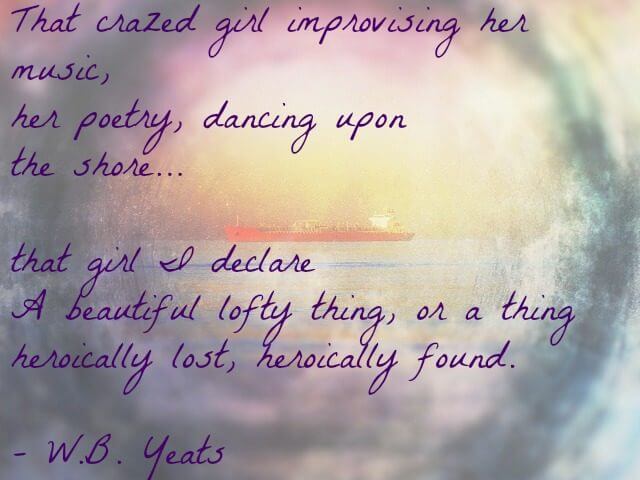 Elizabeth Gilbert posted a fascinating experiment to her facebook wall a few weeks ago. In it, she references an art book by Lynda Barry. Barry has this theory that our artistic, creative selves get suspended in time the moment they’re labeled “non-artists.” If you ask a “non-artist” to draw a picture now, their drawing will look remarkably like the drawing a child might make, a child the age the “non-artist” was when they were told to stop drawing.

I showed her this post and asked her, When was the last time you ate intuitively? With joy? Without guilt? Without shoulds? Without anxiety? How old were you?

How old were you when you were made wrong for wanting what you wanted?

It feels like you’re going to lose control and not be perfect, because that young girl is probably the one who’s going to show up first.

For me, my issues with food started around age 12, although I remember body image stuff starting earlier, as early as age 8 or 9. At age 12 I was also going through puberty, and no one in my family or school knew quite what to do with my emotional outbursts and mercurial moods. I certainly didn’t know what to do either.

I intuited that I was “too much.”

My desires were too much, my emotions were overwhelming, and my feelings were out of control.

I still have that knee-jerk reaction today: there is nothing, no man, no food, no amount of money, in the world that could ever fill or fulfill me. I am a bottomless pit of wanting and there’s no such thing as enough.

If I come to eat from that place, I will overeat just from the desperation of trying to convince myself that I can be filled. I’ll die trying.

Sure enough, when I started letting myself have what I want, it felt like I was a 12-year-old trying something for the first time. I’m pretty sure I did overeat that first time. I probably gained weight too.

But I also, most importantly, started cultivating that little soul spark that says, “I’m here with you. I’m on your side.”

I didn’t make myself justify my desires. I didn’t make myself prove it was the right choice. If I said I wanted it, I’d get it for myself. If I needed to eat comfort food through a breakup, or not think about my life for a few minutes while I ate chocolate and drank wine, fine.

I gave myself unconditional positive regard, and requested only authenticity in return.

Remember, it is the mother who teaches by expanding the innate talents of the offspring. Animal mothers who teach their offspring to hunt are not exactly teaching them “how to hunt,” for that is in their bones already. But they are teaching them what to watch out for, what to pay attention to; those things are not known to them until the mother shows them, thereby activating new learning and innate wisdom.

– Clarissa Pinkola Estes, Women Who Run With the Wolves

Ask yourself how old you were when you stopped eating intuitively. What did you need? What were you really hungry for back then?

PS – If you’re feeling overwhelmed or out of control with food and would like some help, I have a Beyond Emotional Eating course beginning January 4, 2016. I’d love for you to join!