On Tolerating Discomfort and #YesAllWomen 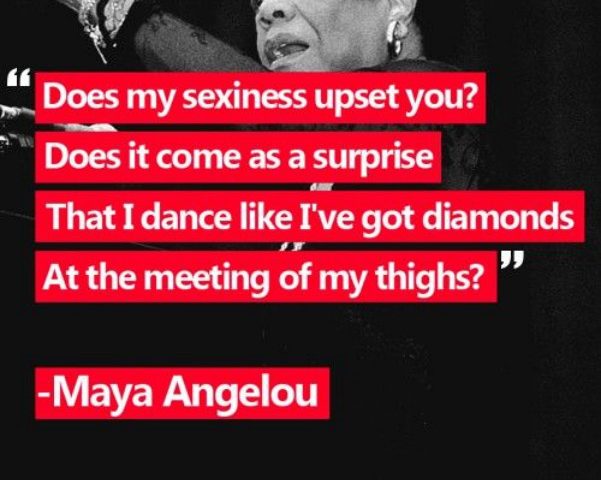 I was so saddened to hear of Maya Angelou’s death this week. I think she was the first poet that ever mattered to me. And by that I mean, when I read her poems, I felt like I really “got” why people love poetry. She was my gateway drug. The passage I reference above is from the poem “Still I Rise,” which is among my favorites. If you’re not familiar with her, please also read “Phenomenal Woman” and memorize it.

Speaking of Maya, I loved reading an excerpt from a poem she wrote for children.

And one man lived a day according to Maya’s schedule. Loved it.

For your weekly dose of cute, here is an afternoon in the life of a pet penguin in Japan. I can’t with his little penguin backpack.

When I said earlier in the week that I had a new favorite song that made me want to dance all day long, this is what I was talking about.

A Young Woman Falls In Love With Everything, thanks to physics.

If there really is one fundamental law in the Universe, elegantly mirrored in everything, why is there also this celebration of irregularity and randomness?

I think The Art Journaler is my new favorite site on the web.

This is a cool app that tells you how far you can get from any one point in 10 minutes. I find that, based on my commute, it’s fairly accurate.

Hope you guys have heard of Solar Roadways, because it’s momentous. Human ingenuity and grit amaze me.

I adore these paint-in-water art pieces.

Friends, I’ve had a few conversations this week about fitspiration photos. In general, I’m pro people using whatever imagery they want to visualize their goals, but sometimes it crosses a line into abuse. Here’s a really excellent article highlighting six irresponsible pieces. This is often what I see when I look at fitspiration.

Change is great. Change is healthy. The desire to change stems from the admirable ability to introspect and to see that, currently, we are limited in ways that we want not to be. If that desire to change, however, becomes a desire to change at all costs, you will be sorely disappointed with what you end up paying.

As I mentioned on all my social media profiles and my blog, I was deeply moved by the #YesAllWomen activism this week. Here are some excellent articles for your perusal.

Actress Felicia Day pointed out both sides of the shittiness that is the “I have a boyfriend” excuse when someone’s hitting on you.

But the one that got me the most was a recurring comment by a lot of women about how “it’s easier to tell a guy that you have a boyfriend so they’ll leave you alone. Because they respect a guy they’ve never met more than you.”

(Which is so sad and true, and every girl knows it in her bones as the way to deal with some horribly obnoxious person at a bar.)

But for me, the flip side is also true: How sad it is if you’re talking to a guy in a social situation, having a really fun conversation, and then somehow it comes up you have a boyfriend, and they drop you like a hot potato. Like, I’ve literally had a person say, “Boyfriend”? And WALK AWAY MID-SENTENCE.

The Belle Jar discusses the flaws and opportunities for violence created by the Men’s Rights Movement.

We are not Lewis from Revenge of the Nerds, we are not Steve Urkel from Family Matters, we are not Preston Myers from Can’t Hardly Wait, we are not Seth Rogen in every movie Seth Rogen has ever been in, we are not fucking Mario racing to the castle to beat Bowser because we know there’s a princess in there waiting for us.

We are not the lovable nerdy protagonist who’s lovable because he’s the protagonist. We’re not guaranteed to get laid by the hot chick of our dreams as long as we work hard enough at it. There isn’t a team of writers or a studio audience pulling for us to triumph by “getting the girl” in the end. And when our clever ruses and schemes to “get girls” fail, it’s not because the girls are too stupid or too bitchy or too shallow to play by those unwritten rules we’ve absorbed.

and I’d love to re-point out this article entitled Socially Awkward Isn’t An Excuse to harass the object of your affection.

A sexologist writes about how women are being slut-shamed to death, both for saying yes to sex and for saying no.

So what can we do to stop this? We can refuse to participate in policing other people’s sexuality. We can call it out when we see others doing it.   We can petition the media to address the misogyny and sexual double standard when discussing these murders. We can talk about it- blog about it, post status updates about it, write school papers about it, talk to friends about it. When it happens online, we can report it.