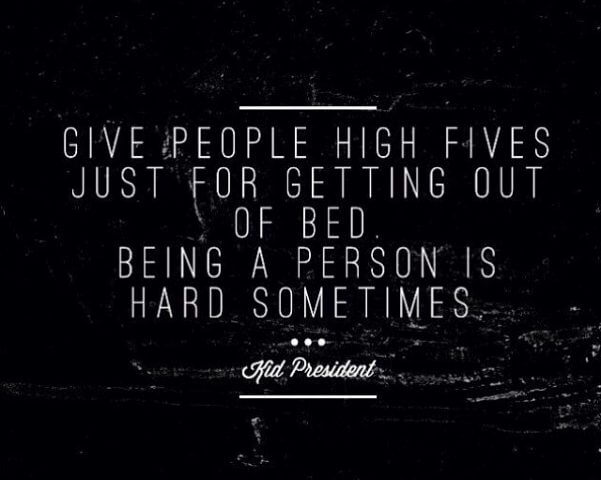 I really like these oatmeal recipes. I’m not a big oatmeal eater, but I have restarted sprouting buckwheat and I think a lot of these combinations will totally work. And also I want all of those wooden utensils.

Here’s the thing about the socially awkward: they don’t want to trip over people’s boundaries. You can almost always track the exact moment they realize that they’ve done something wrong by the way they desperately try to backtrack, apologize and generally try to reassure the other person that they didn’t mean to and they’re so embarrassed and are kind of freaking out and, and, and…

You know what you don’t see? You don’t see them justifying their behavior. Or turning it around and making it about the person whose boundaries they just blew past.  They don’t rely on social pressure – either through making a scene or through other people justifying their actions for them – to make the other person submit to their demands. They don’t argue that the other person is obligated to forgive him, to give him a second chance or otherwise pretend that the awkwardness just didn’t happen. Creepers and predators rely on other people insisting that their social awkwardness is a mistake because it gives them cover. When the “socially awkward” exception is in play, other people are less likely to call him out on his creepy behavior .It becomes a way of isolating somebody from potential allies and tricking others – people who might otherwise object to his bad behavior and assist his target – into being complicit in his actions. The Awkward Excemption teaches other people to tolerate, even expect creepy behavior… and to forgive it because hey, “he means well.” It gives the creeper cover and allows him to continue being part of the community; he’s not “Johnny the creepy predator”, he’s “Johnny the decent guy, a little weird sometimes but harmless.”

Jo is the creative talent behind my website, which I think is the most beautiful thing I’ve ever laid eyes on. And I loved following her art adventures in Bali a month ago! Here’s a recap of the retreat and some of her canvasses. What I love most is the richness of the layers

Why I Tell My Daughter She’s Pretty But Won’t Tell Her She’s Smart. A very interesting thought, indeed.

If I give my children nothing else, I want–no, need–to give them grit.

So that’s why I don’t tell my daughter that she is smart. Because I want her to constantly be trying to improve herself in that regard. (I never understood the concept of telling kids–or anyone–that they’re perfect just the way they are. What motivation do they have then, to work on getting better?) I want her to fail and to persevere and to develop a thick skin and to know that, no matter what the obstacle, she can get over it. Because she’s had plenty of practice.

And that’s why I tell her that she is beautiful. Because I want her to take it for granted, and focus on the truly important things in life, instead.

Friends, I thought that I needed more piercings in order to wear more earrings. False! I need to be layering my earrings. #GameChanger #OnMyChristmasList

This is an awesome primer on watercoloring. Per usual, layering (and therefore, patience) is key. One of these days I’m going to be wonderful at art. Until then, this quotation sums up my artistic experience:

Nobody tells people who are beginners — and I really wish somebody had told this to me — is that all of us who do creative work … we get into it because we have good taste. But it’s like there’s a gap, that for the first couple years that you’re making stuff, what you’re making isn’t so good, OK? It’s not that great. It’s really not that great. It’s trying to be good, it has ambition to be good, but it’s not quite that good. But your taste — the thing that got you into the game — your taste is still killer, and your taste is good enough that you can tell that what you’re making is kind of a disappointment to you, you know what I mean?

A lot of people never get past that phase. A lot of people at that point, they quit. And the thing I would just like say to you with all my heart is that most everybody I know who does interesting creative work, they went through a phase of years where they had really good taste and they could tell what they were making wasn’t as good as they wanted it to be — they knew it fell short, it didn’t have the special thing that we wanted it to have.

And the thing I would say to you is everybody goes through that. And for you to go through it, if you’re going through it right now, if you’re just getting out of that phase — you gotta know it’s totally normal.

And the most important possible thing you can do is do a lot of work — do a huge volume of work. Put yourself on a deadline so that every week, or every month, you know you’re going to finish one story. Because it’s only by actually going through a volume of work that you are actually going to catch up and close that gap. And the work you’re making will be as good as your ambitions. It takes a while, it’s gonna take you a while — it’s normal to take a while. And you just have to fight your way through that, okay?

Speaking of art, here are some awesome illustrations made from paint and household objects.

This is what my car needs.

It’s not you, it’s the clothes. End of story.

I love henna for all occasions: pregnancy, vacation, weddings, and the rest. And I really loved the henna project for women who have lost their hair to chemotherapy. But I want to put a LARGE ASTERISK besides the copy on this page, and make sure you all know that radiation and chemotherapy are NOT the only treatments for cancer, and losing your hair is not necessarily an inevitability. If you find yourself in a position to need information about alternatives, let me know.