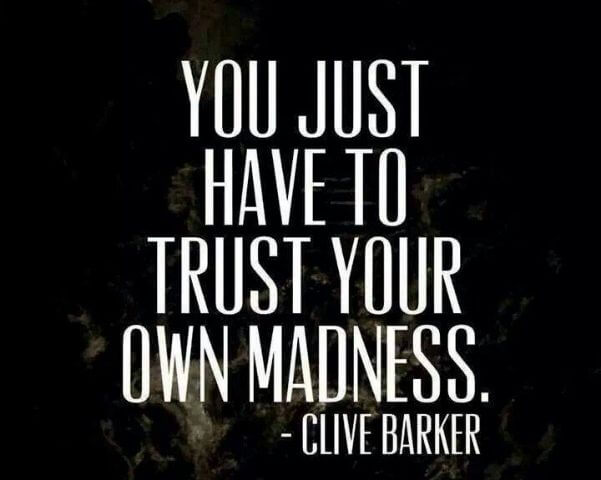 Well, friends, I had another post planned for today, but last night I found myself smack in the middle of a Body Image Complex and I figured I’d write about that instead.

As surprised as I was to find myself with these feelings (it’s really been quite some time since I felt this way), I was more surprised to realize how… observant I felt. I’ve never been able to watch myself here before, much less talk to myself without triggering all my shit.

The first thing I noticed is how much I want everything OUT. I’m reviewing everything I’ve eaten for at least the past week, doing whatever calculations I do to try and figure out input and output. I think that bentonite clay is getting stuck in my intestines. Can I give myself an enema? Magnesium and detox tea tonight. Tons of water. Definitely no food. Maybe I won’t need to eat tomorrow. Everything needs to get out. My body’s natural state would be thin if it weren’t so stuffed.

When [Janet] describes the mind-set that leads to a cutting episode, she uses the image of a balloon: “It’s as through my whole body is so swollen up that it’s about to burst, literally about to explode, and the only way to relieve that feeling is to cut. Bleed it out.” The swollen sensation, of course, is about emotional rather than physical weight: “Need, want, anxiety, I don’t know — feelings, the whole nine yards, you name it,” she says. “I think cutting is probably a lot like throwing up. The compulsion is huge — to just get rid of it, get rid of whatever the hell you’re feeling because it’s unbearable.” Kathleen, who is well aware that her bulimic episodes have less to do with food and weight than they do with emotion, would agree. Vomiting, she says, is always preceded by the sensation that she is “holding too much inside,” that she needs to “get it out,” and that — at least in that moment — there’s “no other way to address it.” ….

Janet and Kathleen use different vehicles to express the same feeling: a sensation of being too full of emotion, too hungry, too needy, too large for their own bodies, and an attendant compulsion to release those feelings and punish the self for having them in the first place….

Being known. This, of course, is the goal, the agenda so carefully hidden it may be unknown even to the self. The cutter cuts to make the pain at her center visible. The anorexic starves to make manifest her hunger and vulnerability. The extremes announce, This is who I am, this is what I feel, this is what happens when I don’t get what I need. In quadraphonic sound, they give voice to the most central human hunger, which is the desire to be recognized, to be known and loved because of, and in spite of, who you are; they give voice to the sorrow that takes root when that hunger is unsatisfied.

Eventually I realize that I haven’t been breathing properly for at least two hours. I’ve been holding my breath, only breathing into my chest, and sucking in my stomach. How I’ve forgotten the feeling of sucking in my stomach. I remember the quote about the breath being masculine, how that’s one way the feminine joins with the masculine to catalyze something new. But every time I breathe deeply I’m reminded of how full I feel. Letting my stomach be distended is too much. I remember that section from Appetites about the anorexic, the bulimic, and the cutter, how the latter is trying just to let the pressure out. I get that. Bigtime.

Each workshop begins with relaxation, to allow the body to find its own rhythms. The emphasis is on natural breathing and focused breathing in order to awaken and release emotions trapped in the muscles. Until the breathing is natural, the images too often remain bottled up in the brain. Fear and anxiety block our breathing. We learn very early in life that any display of archaic or primitive feeling is unacceptable, and we also learn (unconsciously) that the way to control intense emotion is to allow as little air as possible to go below the neck. The deep, full breaths that should nourish the vital organs, not only with oxygen but with awareness of emotion, are held tight in the top of the chest, and the round belly that goes with deep breathing is anathema in the fashion world. The full range of emotions is locked in below the neck and we hear constant complaints of stiff necks, sore shoulders and backs unable to carry their burdens. When the breath of the spirit (the masculine) is not allowed to penetrate the matter of the body (the feminine), conception is not possible. Our society tends to reject the conscious body, the natural container for the divine breath; what it celebrates instead is a flawless machine whose icon is a cadaver in Vogue Magazine. Our bodies have become so rigid and so plugged with unexpressed emotion that there is no room in them for creativity.

I almost brought my running shoes home from the gym so I could run and do yoga [this morning]. I think rejecting the shoes is what made me realize I was in a complex. By that time I had already made plans from now until June about all the working out I was going to do. Every day. Twice a day.

But a small voice spoke up and said, “You said mornings were for pleasure and comfies and walks outside.”

And then a little louder, “All this exercising, it’s not my should.”

What are you hoping all these actions will do for you?

You don’t have a weight issue. You’re not out of shape. I know you know that. All this stuff, it’s not necessary. What are you hoping to get out of all these frantic plans, my love?

If I’m thin, I don’t have to manage the judgment of others. They’ll trust that I’m doing everything right and I won’t have to defend myself or brace against their questions, concerns, or advice. Or just plain old judgment. I’ll be a good example.

I realize now that what my body wanted “OUT!” was stuff that wasn’t mine to begin with: expectations, shoulds, pressure. My body is no longer able to digest that kind of thing, and the hardest thing I’m learning to do this year is to stay faithful to myself.

Because that’s the vow I break when I acquiesce to outside influences: the vow of fidelity to myself. In fact, that’s been the hardest thing about being seen by other people. While I crave the idea that other people could “get” me, it also makes me panic, because then they’ll be able to ask for things. They’ll want to give their opinion. They’ll finally see and accept where I’m at, and immediately jump into the next thing I should do. I’ll be trapped into that version of reality for the rest of my life, to those expectations, because of one single moment of authenticity. It’s my own personal Medusa, ready to turn me to stone.

So when I say it’s hard for me to stay faithful to myself, I mean that it’s difficult for me to hold the tension and paradox of wanting to be my authentic self with other people and believing that I could still have the option to be a completely different authentic version of myself tomorrow. Sometimes changing myself and my preferences looks a lot like rejecting other people, so I resist it, thinking it’ll be easier to just stay the same and not offend anyone.

It’s not my should. I must reject it. I must honor my vows and stay faithful to myself. That’s the only should.