Slowly, Then All At Once 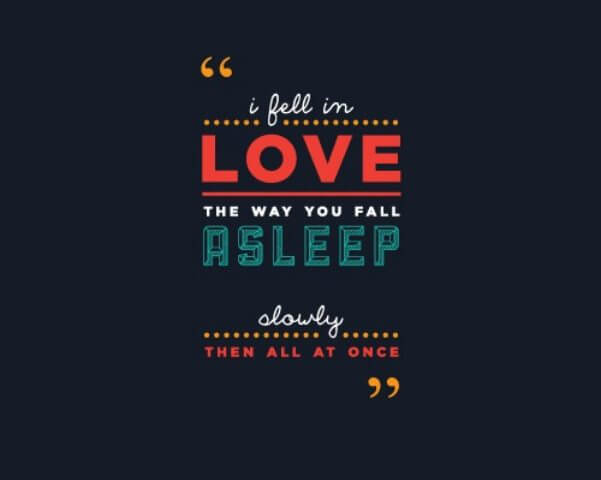 That quotation is from a beautiful book called The Fault in Our Stars, which I finished a few weeks ago. That pattern, that particular way of falling – falling asleep, falling in love, falling in or out of habits, falling at all – keeps coming up for me.

The “slowly” part (for me) is comprised of Much Resistance And Protest.

I’ve been doing a lot of work on my stuff recently, as always, and I think things are starting to change, but sometimes when you’re ready to leave things behind the resistance comes up extra strong, you know what I mean?

Letting go of anything, whatever it is, sometimes feels like death. My current problem is that I can’t articulate what’s wrong, and so I can’t imagine what will be different, except that I’ll be dead (metaphorically speaking, of course). I want assurances. I want to negotiate. I would like to know exactly what’s going to happen during, and confirmation that I’ll be My Ideal Self afterwards.

I’m down with rebirth. I love reinvention. I love becoming a new person.

It’s the death that gets me. I prefer to curate my experience, and death demands surrender.

I keep thinking of a phoenix, rising from the ashes. It’s an image so universal that it’s almost archetypal. But we focus so much on the rising, the rebirth, that we forget the burning.

In fact, the entire point of the phoenix rising from the ashes is that it burned first.

Even the hope of rebirth prevents the burning. The phoenix must burn without knowing its future. Everything has to go, including the hopes and dreams of the future life.

This terrifies me. My logical brain (I think this is my Ego, my sense of Self, in psychological terms) is hard-wired to struggle, programmed to seek life.

When I look back on my life, I see that I have died before. Slowly, then all at once.

I changed without really realizing it.

Now that I look back, it’s so clear that I’m different. When I try to articulate what’s the same, I struggle. I recognize myself, in the rather objective way you recognize your face in a picture. There’s a separation.

Me-From-Then is gone, a memory. I look at pictures of her, or I read journal entries she wrote, and my heart breaks open with the love I feel for her. The love isn’t the same love I have for my current incarnation. She my daughter, my sister, a child of my heart.

Why now do I fear death?

Unfortunately, I have no real answers to this question, aside from knowing that this death is not just necessary, but, on some level, desirable.

It doesn’t necessarily happen all at once. Sometimes it’s a pattern, a friendship, a habit, a paradigm. A job, an age, an ability you took for granted. But it’s been with you for long enough that it feels like it is a part of you. To a certain extent, it is.

You were keeping yourself safe. Surviving using the tools and beliefs at your disposal. Whatever you’re holding onto is there for a good reason, and it has a beautiful lesson for you. Change is a scary thing, and it’s very legitimate to cling to the known.

If you feel resistance, a tension you’re trying to manage, some sort of fight with reality, it may be a sign that something’s trying to let go. Observe it. That’s all. It doesn’t always need to be actively released, it may just need an acknowledgment.

And know that you’re not alone. I think this is one of the big human struggles: this desire to define ourselves as individuals even when the very things we thought defined us start falling away.

Just remember this pattern of falling: slowly, then all at once.